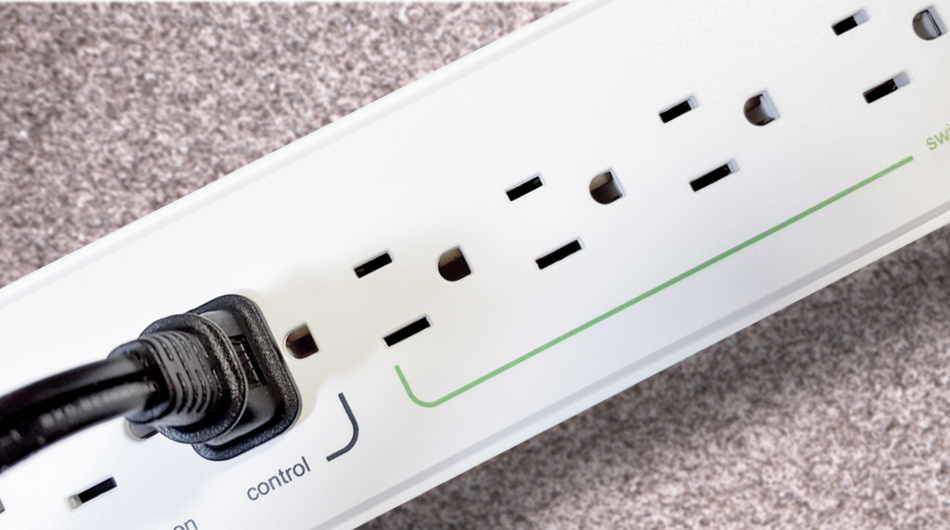 In a nutshell, an advanced power strip (APS) is a simple, low-cost way to manage your electronics—and save energy and money.

Let’s dig into how an APS does this—and why you’ll want to add one to your wish list right now.

How does an APS save energy?

Did you know that the electronic devices in your home or workplace are still using small amounts of electricity even when they are switched off?

Basically, any appliance that shows a small LED light when it’s turned off is using a ‘standby load’ (sometimes spookily called a ‘phantom’ or ‘vampire load’). In fact, plenty of devices with no sleep-mode LEDs still draw a phantom load. For example, your phone charger draws electricity when it’s connected to an outlet, even when there’s no phone attached.

The General Services Administration estimates that residential plug load electricity losses waste enough energy each year to power 11 million homes. That means the average household is paying around $200 each year for wasted energy!

Until recently, the only way to cut out phantom loads completely was to physically unplug the devices—which of course most people rarely do. Now, though, we can solve the problem easily using APS'.

An APS looks just like a traditional power strip—a block of electrical sockets used for plugging multiple electronic devices into a wall outlet. But unlike a traditional strip, an APS intelligently cuts off power to connected devices whenever you’re not using them, eliminating phantom power losses without your having to unplug the equipment.

By replacing your standard power strip with an APS, you can significantly and effortlessly conserve energy and save money on your electric bills.

For example, a typical household using one APS for entertainment purposes and one for home office equipment would save about 106.1 kWh each year (75.1 kWh from home entertainment devices and 31 kWh from the home office, though a lot depends on how your devices are configured).

How do I use an APS?

Although there are several different types of APS on the market, they all operate on the same basic principle of shutting off power to devices that you’re not using.

There are typically three types of outlet on any APS: a ‘control’ outlet, ‘switched’ outlets and ‘always on’ outlets. The APS uses load-sensing technology to detect the current being drawn through the control outlet. You normally plug a primary device like a TV or a computer into the control.

You then plug peripheral devices (like game consoles, DVD players, monitors, desk lamps or printers) into the switched outlets—these become energized when the APS detects a high current in the control outlet, indicating that the primary device is on.

APS' save energy by disconnecting these peripheral devices whenever they’re not needed, thereby eliminating wasteful phantom loads. So, the amount of energy you save with an APS depends on the energy usage of the devices connected to the switched outlets.

The always-on outlets provide power at all times, regardless of what’s happening in the control outlet, so you use these for things like landline phones, modems and cable boxes that need power constantly.

What’s so great about an APS?

An APS allows you to save energy costs cheaply, safely and almost effortlessly.

Between $10 and $80 each, an APS is a very affordable way to control your energy consumption and save on your bills—Efficiency Works provides instant rebates to offset the cost too.

Because they’re so effective in saving energy costs, payback periods for APS' are typically short.

APS’ are easy to install, they’re considered the simplest retrofit energy-saving option for any home.

Your APS will be labeled to show which outlet does what, and include clear instructions on how to properly install, set up and troubleshoot for maximum energy savings.

APS' are just as safe as traditional power strips. In fact, there are a number of safety features and hardware requirements that must be included for a power strip to be considered an APS, including UL safety listings (showing it’s been tested for fire safety) and features relating to lifetime expectancy (which is usually about 10 years). What’s more, APS' are also often better at handling power surges than standard power strips.

As well as helping users reduce their carbon footprint, many APS' are made from environmentally sustainable materials, designed to be easily disassembled for recycling. Some manufacturers even offer a ‘take back’ or recycle program for when the APS reaches the end of its lifetime.